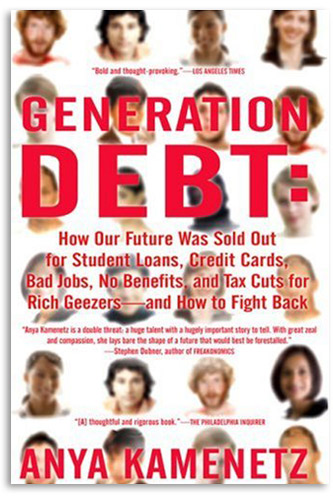 Based on reporting I did for the Village Voice, Generation Debt (Riverhead, 2006) was among the first books to chronicle the plight of young Americans ground down by low wages, high taxes, huge student loans, sky-high housing prices, not to mention the impending retirement of their baby boomer parents. This book examines this issue from every angle and provides a riveting, rousing manifesto that will inspire everyone to take care of their financial future.

Anya Kamenetz is a double threat–a huge talent with a hugely important story to tell. With great zeal and compassion, she lays bare the shape of a future that would best be forestalled.” Stephen J. Dubner, coauthor of Freakonomics

Surveying the economic realities facing today’s 20- and 30-somethings, 24-year-old Kamenetz decides, “It’s not too dramatic to say that the nation is abandoning its children.” Thanks to skyrocketing tuition and changes in federal funding, college students are graduating with an average of almost $20,000 in loans at the same time that jobs have become scarcer, real wages have dropped and the cost of health care has soared. Is it any wonder that kids are boomeranging home and racking up credit card debt? Kamenetz, who first wrote about these issues for the Village Voice, intertwines an analytical overview of the new economic obstacles with interviews of the financially strapped and descriptions of her own experience struggling to make ends meet as a freelance journalist. Most interestingly, Kamenetz documents how our perception of the crisis is shaped by self-centered boomers who have lost touch with their children’s plight.  (Feb.)
—Publishers Weekly

A new book tackles the 18-to-35-year-old generation’s problems–those they face and those they create.Kamenetz believes the younger generation is hampered by the fact that salaries and job opportunities haven’t kept up with drastically increasing costs of living. Because of the exorbitant cost of college, many young people can’t afford to go, and those who do go graduate with huge debt. Graduates expect to pay off those loans once they get jobs, but entry-level jobs often come with low wages. The job prospects are even worse for those who don’t finish or who don’t go to college at all–some can’t even afford living on their own, another drastically increased cost. The solution to these problems? Kamenetz makes a passionate argument for young people to take action, such as lobbying the government as a cohesive group and being practical and frugal about money matters.
—Booklist