A sampling of interviews, excerpts and reviews of The Art of Screen Time

Once I started talking to experts, I quickly discovered it’s not just parents who are confused. The world of research on kids and media, especially on increasingly ubiquitous mobile and touchscreens, is relatively young, hotly contested, and full of gaps. Enduring a tantrum-prone toddlerhood, if you will.

I often have my phone in my hand while breastfeeding my one-year-old daughter. This isn’t a confession, because I don’t feel guilty about it. Even though there are lots of people implying that I should.

Screen time is a daily battle. Between kids and parents, between ourselves and our better judgment. But maybe it doesn’t have to be. There is a better way.

Best thing I've done w/ my 12yo is getting a 2nd controller for our PS4 so we can play video games together in living room. Lego games in particular have co-op mode so we both have characters on screen at same time. We work together to solve puzzles.

As technology increasingly dominates the lives of children, there remains a dearth of conclusive evidence about best practices for parents. Last month, Facebook released Messenger Kids, sparking outrage among child health advocates. Currently, two Apple shareholders are pushing for the company to reprogram the iPhone and iPad to allow for greater parental controls. In “The Art of Screen Time” Anya Kamenetz pieces together scientific research and personal experience to help families navigate their relationships to screens in a digital world. She joins us to discuss the book’s major takeaways.

Seattle’s Town Hall -In the Moment

Seattle’s recently-passed universal pre-k measure included a stipulation of standardized testing, but according to Kamenetz, today’s schools are sacrificing learning by enacting such regulations. Her insightful look at the world of standardized testing is a wake up call for teachers–and parents–to move beyond numbers, and refocus on the child.

Anya Kamenetz, author of The Art of Screen Time: How Your Family Can Balance Digital Media and Real Life, a mother of a six-year old and a toddler, monitors her own kids’ screen time quite closely. “In our house video watching is a Saturdays-only activity for the big girl,” she said. “Having clear rules works well for us at this age. During the week she gets three iPad sessions of 20 minutes to half an hour. We also have exceptions like travel, vacation and sick days, but even on screen days we make sure to balance with other activities,” she says.

There is an art to parenting with assistance from screens, weaving new media into family life – and it can have many benefits.

Because we still know so little about how screen time affects kids, it’s hard to determine what appropriate technology usage should be within families

One way to keep kids from overdoing technology is to give them credits they can spend for screen time (and perhaps earn by doing chores). For example, Kamenetz’s 6-year-old daughter receives three 20-minute passes a week to use an iPad.

Institute for the Future talk

Gretchen: What’s a simple habit that consistently makes you happier?

Anya: I don’t regularly meditate, but I stop and take deep belly breaths throughout the day, especially before I pick up the phone, go into a situation that makes me anxious, or go to bed at night.

USA Today: Public schools have been testing students for more than a century, but education journalist Anya Kamenetz says the level of testing we’re doing now is “unprecedented.” There’s been a lot of push-back over testing lately, but Kamenetz says many people “aren’t necessarily questioning the fundamental premise behind it.”

Boston Globe:  The value of Anya Kamenetz’s new book, “The Test,” lies in her ability to avoid the soapbox style of too many books on education reform today. Her journalistic talents coupled with her role as a mother of a student on the brink of testing humanizes this book, making it a perfect entry for parents who are too deep in the muck of testing to have the clarity of distance.

Inside Higher Ed:   GIven my misgivings about the conceptual underpinnings of her earlier work, I was a little reluctant to read The Test. But I’m happy to report that her reportage has become more thoughtful, without losing its energy or accessibility. It’s a strong, smart, readable, and intellectually honest book….

I approached The Test warily, but came away impressed.  Kamenetz manages to find grounds for optimism in a subject that could lend itself to fatalism, and she does it without dismissing the needs that the status quo serves. She has kept the energy and readability of her earlier work, while adding something like wisdom.

Happy Publication Day!
An excerpt from The Test ran in Salon.com over the weekend. I’m really happy with the responses so far!

If you can’t manage what you don’t measure, as the business maxim goes, how do we measure the right things so we can manage the right things? How do we preserve space for individual exploration while also asking our children to hit a high score? Is there any way to channel the collective thirst for metrics and data into efforts that actually make our schools and our communities healthier and our children more successful?

The modern era of high-stakes standardized testing kicked into gear at the turn of the twenty-first century, with federal No Child Left Behind legislation mandating annual math and reading tests for public school children beginning in third grade. It has not been a golden age. Standardized testing has risen from troubling beginnings to become a $2 billion industry controlled by a handful of companies and backed by some of the world’s wealthiest men and women.

Excited to hear more about The Test?

I’m coming on tour starting in January. Look for me at the following events! If you’d like to have me in your town, please let me know or email djones at kepplerspeakers dot com.

Over at my NPR Ed blog, we published a piece recently with a great interactive showing how standardized tests are taking over in schools.

The Test is coming on tour in January. Look for me at the following events. If you’d like to have me in your town, please let me know!

I appeared on All Things Considered last week talking about the Atlanta cheating trial, in an interview that drew on my research for The Test. Listen and read here.

The defendants are 12 former employees of Atlanta Public Schools. They are accused under the state’s racketeering laws of conspiring to falsify their students’ results on state standardized tests. Dozens more school employees have faced ethics sanctions in a case that has rocked the city of Atlanta for the past few years.

The trial is unusual. It’s likely that millions of dedicated teachers around the country spend their entire careers without engaging in the kind of behavior that happened in Atlanta, or that I heard about in that spa.

But high-stakes state standardized tests of this kind are not unusual. They are mandated in nearly every public school by No Child Left Behind, the 2001 federal education law. These tests are high-stakes because they trigger serious consequences for students (like grade promotion and graduation); for schools (like extra resources, reorganization, or closure); for districts (the loss of federal funds); and for school employees (bonuses, demotion, poor evaluations, or firing).

And so the Atlanta trial should bring two questions: How common is cheating on these tests? And short of cheating, what else might be happening in schools as a result of these tests? 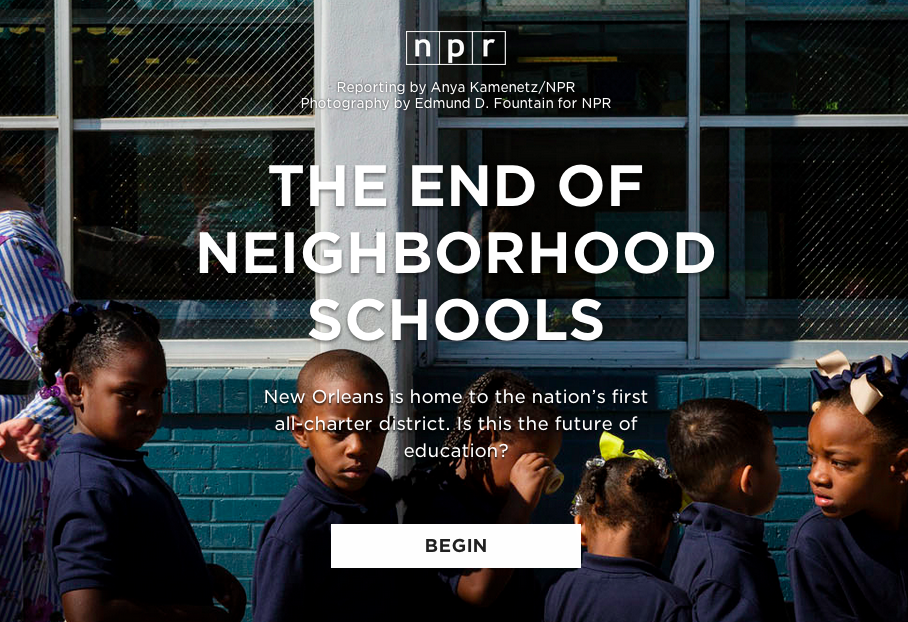 Here’s one of my recent pieces for NPR.org: a report from New Orleans, where over nine out of ten children attend charter schools.

Pre-order The Test from IndieBound or many other fine booksellers. 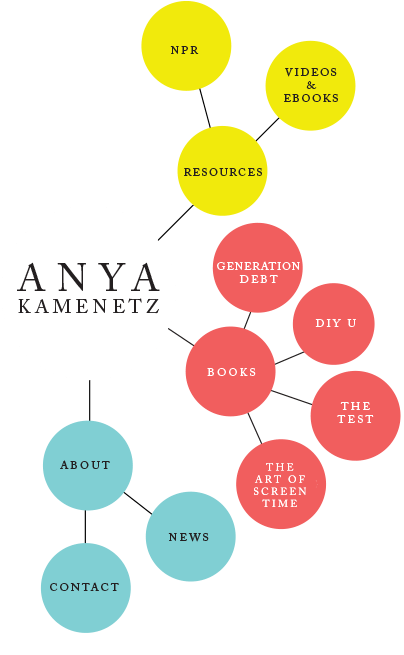 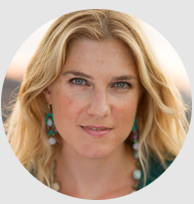 Welcome. I’m Anya.
This is my site about
the future of education.
Tweets by @anya1anya
This popup will close in:

Sign up for my monthly email newsletter. It’s free!